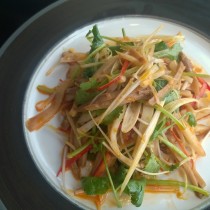 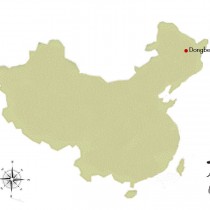 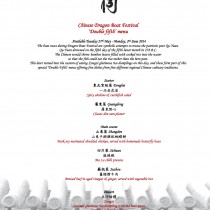 Counting down to our ‘Double Fifth’ celebrations

Monday 2nd June marks a very special date in the Chinese lunar calendar. As the fifth day of the fifth lunar month, it is the day of the traditional Dragon Boat Festival, an ancient tradition dating back to the death of China’s revered patriot poet Qu Yuan on that day in 278BC.

Yuan lived during what is now known as the Warring States era in ancient China, and wrote the great anthologies of poetry Chu Ci and Shi Jing. In despair at hearing of the capture of his beloved country’s capital, Yuan committed ritual suicide by wading into the Miluo river.

According to legend, villagers took their boats out into the river, desperate to save him and, tragically unable to, threw rice dumplings into the water both as an offering to his spirit and to distract the fish away from him. These acts are remembered to this day in the Dragon Boat Festival, river races which take place on the fifth day of the fifth lunar month, and the eating on this day of zongzi, sweet glutinous rice dumplings symbolic of those thrown into the river by the villagers.

To mark this special occasion, Hutong will be serving a very special ‘Double Fifth’ menu, priced at £55, during the seven days which end on the day of the Dragon Boat Festival – Tuesday 27th May until Monday 2nd June. Each of the five courses is drawn from one of five different regions of China with its own culinary style, and the meal ends with traditional zongzi.

The first course is a spicy abalone and cuttlefish salad, typical of Dongbei region in north-eastern China. Dongbei’s cuisine is highly spicy, uses lots of seafood, and braising is a popular cooking technique. This dish combines all three aspects, combining spicy shredded chilli with cuttlefish and braised abalone – a type of large sea-snail and a prized delicacy.

Each week up to and including the week the Double Fifth menu is available we will feature another course, which we hope will whet your appetite enough to wish to join us in this unique commemoration of Qu Yuan.

How do you mark the Dragon Boat Festival? And which of Qu Yuan’s poems is your favourite? Do please let us know in the Comments.