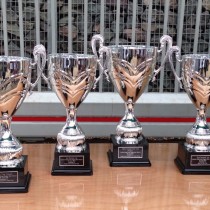 We had a wonderful afternoon on Sunday 28th June at London Regatta Centre, for the 2015 London Hong Kong Dragon Boat Festival. Not only were we there to enjoy the many races taking place (which are the traditional commemoration of the death of China’s revered patriot poet Qu Yuan in 278BC) but also to present the Hutong Anniversary Cup, for the second year running.

Awarded to the team which over the course of the day records the fastest race time, the Hutong Anniversary Cup was inaugurated in 2014 to mark our first anniversary of opening at The Shard on 26th June, 2013. This year’s winning team were the Wraysbury Dragons for their race time of 50:33, which also won them the ABP Professional Cup for that particular race – making them double winners!

The Hutong Anniversary Cup was presented to the team’s captain by our head chef Bing Luo and restaurant manager Lee Keong, who both very much enjoyed meeting the teams as well as many of the hundreds of families who had turned out on a (mostly!) sunny afternoon to enjoy the day, excellently organised once again by London Chinatown Lions Club.