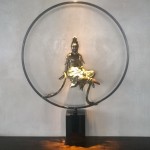 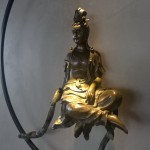 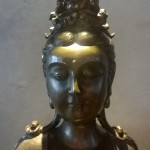 One of our most commented-upon artefacts in Hutong is the beautiful, some say mesmerising bronze statue which stands directly opposite the moon-gate into the Shanghai Bar. Familiar to many of our guests but perhaps less so to others, the subject of this work of art is Guanyin (觀音), also known as the Iron Goddess of Mercy.

Revered for centuries throughout the Far East as a bodhisattva – in Buddhism, one who has achieved enlightenment – and by Chinese Taoists as an immortal, prior to the Song dynasty (10th-13th century) Guanyin was portrayed as male, then as having both male and female attributes, but by the 13th century was portrayed as female, for reasons which are not clearly understood.

Guanyin is considered the embodiment of mercy and compassion, qualities which can be seen in the serenity of her facial expression and levitating posture in our statue of her. Numbered 18 out of a very limited edition of twenty-eight, the statue’s number lends it an extra-special quality as the numbers one and eight are thought particularly auspicious in China. The ring in which she appears to float perfectly mirrors the shape of the moon-gate, a traditional Chinese architectural detail, opposite.

Guanyin is referenced elsewhere in Hutong, too; Tie Guan Yin is the name given to the fine tea which, compressed into bricks, forms the Tea Wall in the Beijing wing.